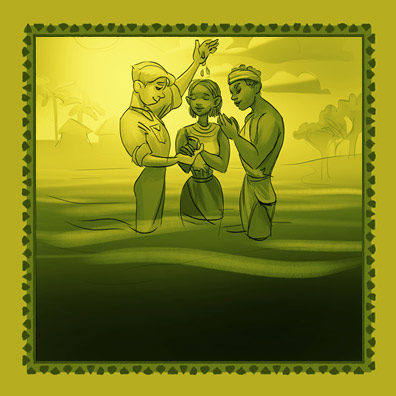 Christianity, the religion of Staś and Nel, is a very important element in the novel and has a powerful impact on the course of the adventures. The 19th century was a time when Christianity in Africa clashed with the local religious beliefs. It must be remembered that this part of the continent was Christian already in ancient times. The first mentions of the fact come from the time of the apostles.

Only from the 14th to the 16th century, Christians began to be pushed out from the territory of Nubia, conquered by Muslims at that time. Another important moment for the Christianisation of Africa was the time of great overseas expeditions and colonisation. In the late 14th and early 15th centuries, members of the Portuguese and French expeditions began to offer baptism to the African tribes they met, in return for a promise of peace.

They were the ones who had the first church built in tropical Africa. Initially, this activity was very well received by the local population, yet with time, when it turned out that many Europeans primarily intended to exploit Africa rather than bring it Christian aid, the relationships became far more tense.

During their travels, the heroes of the book, Staś and Nel, paid a lot of attention to converting locals to Christianity: the boy considered it even one of their most important tasks. They did it, trying to tell Kali, Mea, and Nasibu about their faith, and later by baptising them. Asked by Linde, Staś also baptised his unconscious servants, dying of coma.

Today, Christian missions in Africa not only preach their religious faith but also provide access to education and medical treatment to the poorer population of the continent. Today, nearly every other inhabitant of Africa is Christian.

Briefly describe the process of converting Kali, Mea, and Nasibu to Christianity.
Staś and Nel told Kali, Mea, and Nasibu stories from the Bible and tried to explain the rules of the faith to them, yet these were not always comprehensible for the “students”. They especially found the issue of good and evil problematic. The process of conversion ended with the baptism of Kali, Mea, and Nasibu.
Why did Staś baptise the unconscious servants of Linde?
He did it at the request of Linde, who wanted them to die as Christians and experience salvation.
What do the missionaries do today in Africa besides preaching their faith (name two activities)?
They provide medical service and develop education.
From where did Christianity come to Africa ancient times, and from where in the late 15th and early 16th centuries?
In ancient times Christianity reached Africa very early, moving from Egypt all over North Africa. In the 15th/16th centuries, these were mostly colonisers (chiefly Portuguese) who Christianised the continent.