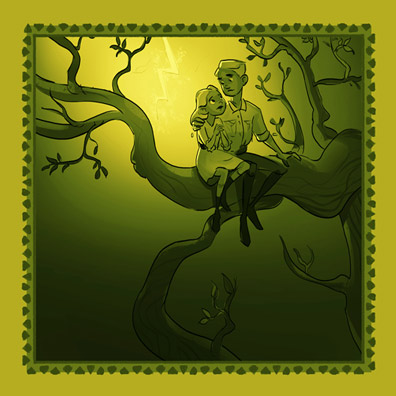 Dozens of exotic animal species are mentioned in the pages of In Desert and Wilderness. Little wonder: Africa is a continent famous for plentiful and varied flora and fauna.

The most recognisable African animals are of course the great herbivorous (i.e. plant-eating) mammals: elephants, giraffes, rhinoceroses and antelopes, as well as carnivores (i.e. meat-eating) ones: mostly the big cats (lions, leopards, cheetahs (but also jackals and hyenas). All these animals are perfectly adjusted to living in the African climate. The five large African mammals – the African elephant, the black rhinoceros, the lion, the wildebeest, and the leopard were called “the great five”. The term was invented by hunters who considered these animals the most difficult to hunt.

These are not the only dangerous creatures in Africa. On the way, Staś and Nel encountered for example, the dangerous “wobo”, a mysterious predator from the feline family, whom locals deemed more horrible than a lion. It’s impossible to say what animal this could be, although some claim that Sienkiewicz meant a serval (a wild cat native to Africa).

Africa is also inhabited by plenty of ape and monkey species. They mostly live in the tropical forests, but they are also found on the grassy expanses of the savannas.

The central part of the continent is inhabited by numerous bird species, including flamingos, grey parrots, and very characteristic shoebills. There are also plenty of insects, amphibians, and reptiles: snakes (for example cobras, and the very aggressive, quick, and venomous black mambas), lizards (monitor lizards and chameleons), and turtles and tortoises.

Which animals helped Staś and Nel during their journey, and which posed the greatest danger for them?
Helpful: King the elephant, Saba the dog, horses; dangerous: lions, monkeys, the “wobo”.
How did Staś treat animals?
He mostly tried to use them for his own purposes, for example, he hunted to obtain food.
What attempts are made today to protect endangered species of African animals (provide at least two examples)?
Nature reserves and national parks are established, certain trades are banned (e.g. in ivory, i.e. elephant tusks), prohibition of big-game hunting.
How do the animals of Africa adjust to difficult living conditions? Quote at least two examples.
Living in herds and flocks, in which individuals protect one another; by camouflage that helps them hide; the development of a long neck; ability to move and run quickly, etc.