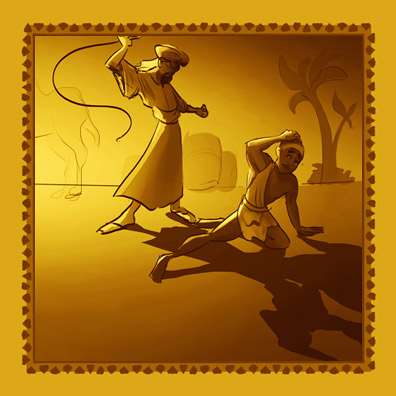 A slave is a person treated like a commodity that can be sold and bought. A slave is bereft of most rights that free people enjoy, and a slave’s future and life are decided by traders and owners. Today slavery is illegal, but it has a long and horrible history.

In the days of In Desert and Wilderness, slavery in Africa was still commonly practised. Plenty of the contemporary slave hunters and traders were African Arabs, that is the Islamic people of northern Africa, with full or partial Arab origin. The tradition of Islam allows slavery, but only when the slave is not a Muslim.

African slaves were sold to buyers from many corners of the world. Until the 19th century, every year Europeans bought tens of thousands of people, mostly to have them forcibly settled in huge plantations of cotton and sugarcane, and in mines. Many slaves were also sold to the Arabs from the Arabian Peninsula, to serve not only as a labour force but also as soldiers. Girls and women were often forced to marry their new lords and/or to serve at home. That would probably be the future of Kali and Mea, the people Staś saved.

We find slavery even today in some countries. Why should it be persecuted by law with all severity?
Slavery is an affront to human dignity, it results from violence, and makes people be treated like objects. It is against the law of nature and the system of values binding in our culture.
Who bought slaves in the 19th century and why?
Slaves were mostly bought by Europeans and Arabs. They use them for heavy labour, military service, and forced marriages.
How do Staś and Nel relate to Kali and Mea?
Friendly and well, but also with a sense of superiority.
What is the attitude of Kali to Staś?
Kali has unlimited respect for Staś, is obedient and submissive towards him; he is ready to serve, even though he is son of a tribal chief.