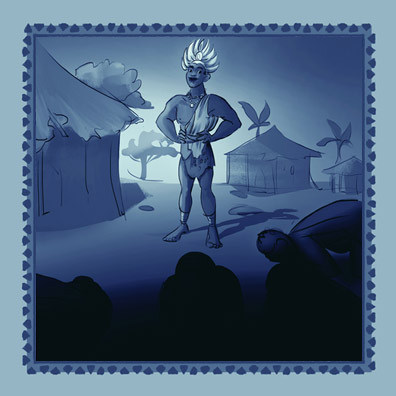 Henryk Sienkiewicz described the land of the indigenous Africans as a network of villages strewn all over the savannah, often being small states at the same time. One of them was the Wa-Hima country. Kali became its king after the death of Fumba. The kingdom of Buganda was established in the 14th/15th century less than 300 km from the place where the cottages of Kali’s tribe stood, and at the time of In Desert and Wilderness, it was at the height of its power.

Buganda somewhat resembled mediaeval European kingdoms. The most important person in the country was the kabaka, that is the king. He held sovereign power over the whole country and was the owner of nearly all the land in the kingdom. He gave it as fiefs to deserving subjects, or in other words, he loaned it to them in return for obedience. The whole country was divided into provinces, whose heads were directly subject to the king. The provinces were subsequently divided into regions, with each encompassing a number of villages. The state hierarchy was ordered, and everyone knew who to listen to, and who to reign over.

The kabakas were infamous for the brutality they exhibited while quelling any semblance of insubordination. Mutesta I, ruling Buganda at the time when Staś and Nel were crossing deserts and wilderness, is rumoured to have had 500 of his wives executed.

Interestingly, Europeans believe the same Mutesta I to have been exceedingly intelligent and well-educated. He is said to have known a number of languages, practised various sports, and played many instruments. His heyday ended with the mission of Long, an envoy sent by General Gordon, known from Sienkiewicz’s novel. His task was to impose  English rule over Buganda. This took place in 1894, when the British made it their protectorate, which practically meant the loss of independence of the state.

Who was a kabaka?
Kabaka was the ruler of the kingdom of Buganda, comparable to European kings.
Who is a vassal (fief holder)?
A vassal is a subject of a king (or kabaka) who received land from him as a fief, and in return pledged military aid, obedience to his sovereign’s orders, and a share in the profits from the use of the land he received.
Why did Kali become the king of the Wa-Hima?
Because Fumba, its ruler, died, and as the oldest son Kali was his successor.
Did Kali believe he held full royal power?
Yes, although he still considered himself a servant of Staś, and called him his king.