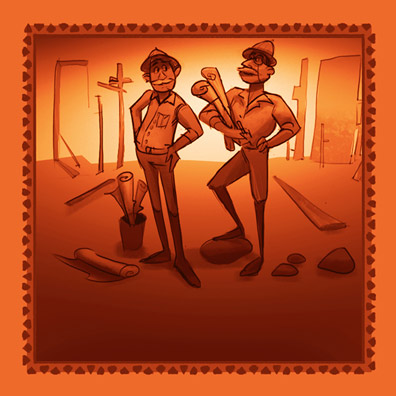 The two gentlemen worked for the Suez Canal Company. The Suez Canal connects the Mediterranean with the Red Sea. It is the most advantageous route for water transportation between Europe and Asia and is used for shipment to this day. The construction of the canal was completed in 1869, yet the first attempts at digging through this section of land were made already in ancient times.

The construction of the canal was a huge project. To allow it, the city of Port Said, where the plot of Henryk Sienkiewicz’s novel takes us to, was built. The Egyptian government could not afford such a great expense and soon began to borrow money from France, yet as it couldn’t pay it back, became dependent on it. Finally, the viceroy sold his shares in the canal to Britain, which in this way gained a share of control over the route. It took over authority over the entire Canal in 1882, after putting down the rebellion against European colonisers. Britain drew benefits from the canal also in the 20th century, and this even after the theoretical regaining of independence by Egypt.

How did it happen that the children lived in Egypt, although Nel was English, and Staś was a son of a French woman and a Polish man?
Because of his participation in the 1863 January Uprising against Tsarist rule, Tarkowski couldn’t live in Russian-occupied Poland and was exiled to Siberia, from where he escaped abroad. Like Mr Rawlison, he got a job on the Suez Canal.
What exactly did Staś’s and Nel’s fathers do, as the Suez Canal had long been completed at the time of the action described in Sienkiewicz’s novel?
The fathers supervised work on deepening the bed of the canal and its conservation.
Why was Egypt so important for European powers?
A route connecting the Mediterranean to the Red Sea could be dug through Egypt. This waterway from Europe to Asia helped to facilitate trade with this important region.
How did the Egyptian government lose authority over the canal?
Because the costs of the project were high, Egyptians had to sell their shares in the canal to Britain to manage the debt incurred by its construction.