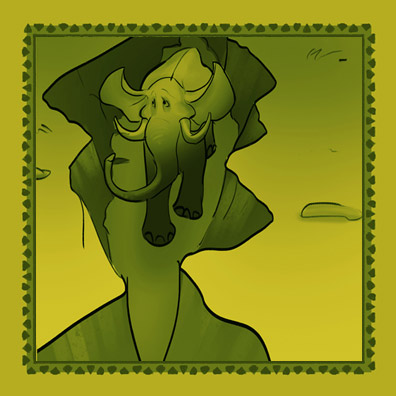 The African elephant, like the one saved by Staś and Nel, is not the only elephant species: their cousins are Indian elephants, and the long-extinct woolly mammoths. There are many features distinguishing African elephants from Indian ones: the former is the largest land animal and can grow even to 4m (13ft) in height, and may weigh up to 7.5 metric tons. Indian elephants are usually around 3m (10ft) tall and weigh up to 5 metric tons; they also have smaller ears and tusks, which nearly disappeared in the females.

African elephants live in the savannah and in the steppe, and Indian ones mostly in jungles. They all love to bathe and play in water, which they also drink a lot of, as Nel noticed watching King. It is estimated that an elephant may need as much as 200 litres (44 imperial gallons) of water a day.

Elephants live in herds composed of females and calves, while mature males live most of the time alone. There is a hierarchy in elephant families: individuals follow the female that leads the herd, and when conflicts arise, they usually solve them in a peaceful manner. Elephants are highly intelligent. Their submissiveness and susceptibility to training have made people use them for their purposes for centuries: in ancient times for battles, and later for labour and transport.

How did Staś and Nel tame the elephant?
They fed him, approached him, and spoke to him, they helped him to get out of a ravine.
What traits of elephants can be derived from Sienkiewicz’s description of King?
Intelligence, submissiveness towards humans, courage.
What are the differences between African and Indian elephants (list at least two features)?
African elephants are bigger and heavier, and have bigger ears and tusks.
Describe what an elephant herd looks like and how it functions.
A herd of elephants consists of females and young ones (as males live separately most of the time). Elephants communicate with one another, move in a whole group, protecting the weaker individuals, and the herd is highly hierarchical.