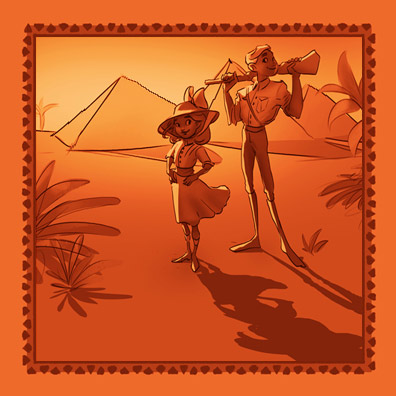 The main heroes of In Desert and Wilderness are Staś and Nel. It is, nonetheless, important to note that Henryk Sienkiewicz describes them quite differently.

Already at the beginning of the novel we find a long description of the brave and intelligent Staś, while all we know about Nel is that she was “sweet”. After the kidnapping the boy acts, plans, and fights against adversities, and the girl needs incessant care. She is younger than Staś, yet even for her age she behaves and thinks in a childlike manner. This is how the traditional division of roles was perceived early in the 20th century: the man was to be active, courageous, and industrious. Therefore this is what Staś is like: he fits the ideal of the brave Pole described in all Sienkiewicz’s novels. The boy calls himself “a knight errant” thus making a reference to a very old standard of masculinity.

Nel in turn is a charming girl: beautiful and naïve. Her very charm captures the hearts of people and animals. She follows the stereotype that requires that a woman be nice, good, and beautiful, yet not necessarily resourceful and educated. She didn’t attend a school because she had a private teacher like all her contemporary girls from good families.

Similarly, the secondary heroes are treated in a stereotypical way. In the days of Sienkiewicz, white Europeans considered themselves better than people of different skin colour. That is why, although Kali is the son of a chief of a tribe, he is courageous and knows how to do plenty of things, without which the children wouldn’t survive in Africa, he’s a comic figure in the novel, and as much as Staś likes him, he treats Kali as an inferior. Mea hardly ever speaks, not to mention any independent action. All we know about her is that she loves Nel and Kali, and dreams of beads.

Arabs are a group described one-sidedly. In accordance with the then contemporary European point of view, they are present solely as negative, brutal, and cruel figures. Sienkiewicz doesn’t analyse their points of view and calls them “barbarians”.

Such an image of the heroes results from the literary convention assumed and is also a reflection of the way how most Europeans thought about the world at the time when Sienkiewicz wrote his novel. This is worth remembering while reading.

Which skills that Staś had could be useful (not only for boys) also today?
Knowledge of foreign languages, history, geography, and sciences is useful. Other helpful traits are physical fitness and resourcefulness.
Although Sienkiewicz doesn’t devote much attention to Mea, we know something about her as well. Mention three traits of Mea.
Mea was hard-working, caring, faithful, and modest. She also had plenty of practical skills: she knew how to cook and survive in the jungle.
Who are Sienkiewicz’s role models for the characters of Staś and Nel?
Sienkiewicz worked on the models of woman and man (girl and boy) that existed in his days. Moreover, the two are similar to the protagonists in Sienkiewicz’s earlier novels.
Staś and Nel are the main heroes, what – according to this division – should we call Mea and Kali?
Mea and Kali are the supporting heroes.