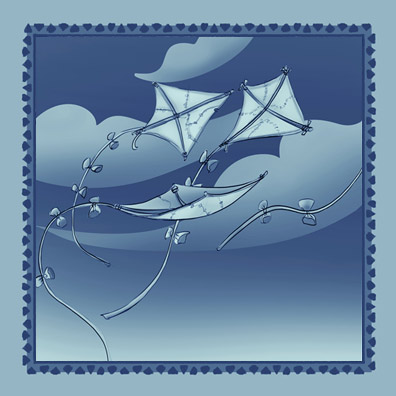 Staś attached a plea for help on the kites that he sent while they were journeying. He knew that the most important task he and Nel had was to notify others of their situation. The most common way of sending information late in the 19th century, that is, at the time in which In Desert and Wilderness is set, was the writing of letters and sending them by post. This was something Staś couldn’t do, as where in the heart of Africa could he find a post office?

When someone was in a hurry, they sent a telegram. This was done with a telegraph, a special device, which often used Morse code: a special alphabet consisting of dots and dashes, that is long and short signals. It enabled news to be sent to destinations hundreds of kilometres away within minutes.

The people of Africa also had their own means of communication. By drumming on the tam-tams (i.e. “the speaking drums”) they could send news to a distance of 7–10 km, using sound codes on their drums made of hollow tree trunks. Sent in such a way, the message went from one village to another, and could quickly cover the huge expanses of the Dark Continent. Late in the 19th century, the technology of passing messages was already quite advanced, even though telephones were not yet in general use.

What is a telegram, and what is a telegraph?
A telegraph is a special device that makes it possible to send messages, usually encoded with Morse code, to distant places, and the telegram is a message passed via the telegraph.
What is Morse code?
Morse code is a special alphabet which enables the sending of text messages composed of long and short signals using light, sound or electric impulses.
What did Staś make the kites from, how did he get the necessary materials?
Staś made the kites from bamboo (frames) and fish bladders. He obtained the necessary material in the bush. He also used paper that he was given by Linde.
The kite found by the caravan of Dr Clare and Captain Glenn included Staś’s message “the rainy season is long gone”. What, according to the rescuers of the children, did such a manner of recording the date prove?
The fact that travelling through the African wilderness, Staś lost count of time and couldn’t state the precise date.