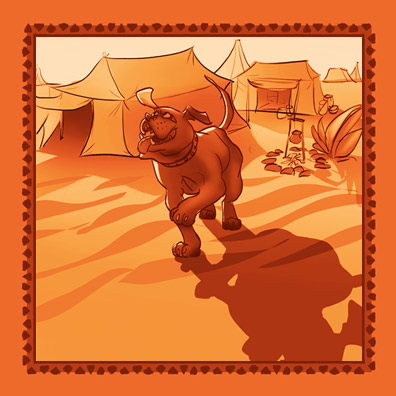 Huge, yellowish-fawn, and strong – Saba was a perfect example of a mastiff. Mr Tarkowski was right to say that “these are the world’s largest dogs”. One of them even made its way into the Guinness Book of Records.

Little wonder that it was a mastiff that Staś’s father decided to present to Nel. Despite their dangerous looks, dogs of this breed are friendly, faithful, and eager to play. These powerful animals are hardly ever aggressive. Nonetheless, they can attack if provoked. In the Middle Ages, the name “mastiff” was used for various types of big, fierce dogs that were kept outdoors as guards. Another important duty of mastiffs was to take part in hunts. To increase the speed of the mastiffs used for hunting, the dogs were crossed with other breeds. For that reason some dogs lost their size and became more subtle than the representatives of the breed we know today. There were, however, also the huge war mastiffs used on battlefields. Such dogs often had collars with blades to maim the enemy’s horses.

What was the meaning of the name Saba and why was it appropriate for Nel’s dog?
Saba means “lion”, and denotes the animal that the girl’s mastiff recalled by its huge size and yellowish fur.
What did Saba do to welcome Nel?
Licked her on the face (and as he had a huge tongue, he made something of a mess).
List four traits of character typical of contemporary mastiffs.
Friendly, gentle, loveable, devoted, cheerful, and brave (aggressive) when provoked.
What were mastiffs used for in the Middle Ages?
To guard homes, hunt, and fight.