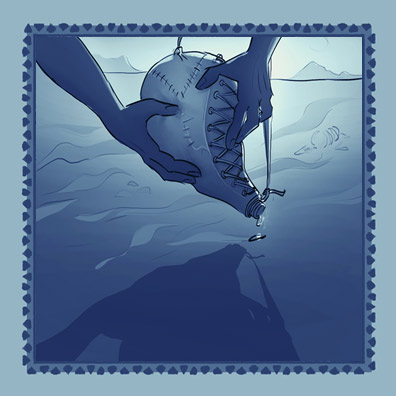 Staś and Nel were at death’s door as they neared the end of their journey, crossing the desert situated beyond the Wa-Hima villages. The boy’s water supplies ran out very quickly, and the young travellers, together with their escort, would have met certain death, if they had not been saved by Captain Glen and Doctor Clary.

The human body is composed of 60–70% of water, yet it keeps losing it due to the processes of digestion, sweating, and even breathing, which is why water must be replenished. A human can live no more than 7 days without water. The heat of the desert and the vast effort of the people crossing the burning sands made members of Staś’s caravan lose water more quickly, and consequently they needed more of it. In such conditions, the time of survival without drinking becomes even shorter and does not exceed three days. After that time, a traveller lies down to rest for a while, never to rise again. This was the fate of many Wa-Hima and Samburu following Staś and Nel.

The state in which our body contains less water than is necessary for correct functioning is known as dehydration. Symptoms of dehydration, besides the feeling of strong thirst, include a general weakening of the organism. These are also accompanied by a feeling of dryness in the mouth, headaches, dizziness, high body temperature, and many others. To fight dehydration, in most cases it is enough to hydrate the organism. In cases of severe dehydration, medical assistance is needed.

What are the symptoms of dehydration?
Strong thirst and a general weakening of the organism, a feeling of dryness in the mouth, headaches, dizziness, fever.
How many days did Staś go without a drink?
Staś didn’t drink for 3 days.
If the human body is 60–70% water, how much water is there approximately in you?
The player makes the calculation and gives the approximate result.
Why did Staś’s caravan lose water so quickly?
Because two witchdoctors stole most of the supplies, and escaped with them to the desert, where they were killed by wild animals.