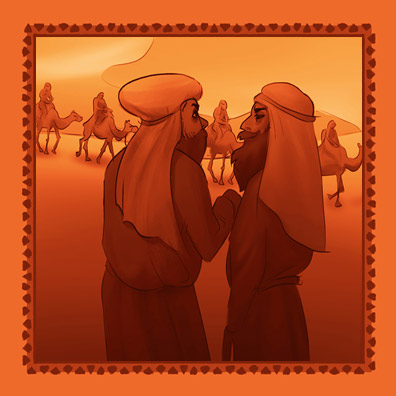 Staś and Nel lived on the territory of one of the oldest cultures of the world. Heritage dating back thousands of years was plentiful, and the heroes had an opportunity to visit some of it during their excursion to Medinet. There were, however, many more people who were interested in this. The new discipline of Egyptology developed around those remnants of ancient cultures.

The interest in Egyptology in Europe was kindled by the expedition of Napoleon Bonaparte to Egypt late in the 18th century: besides soldiers, the French commander took a great deal of academics, whose studies made the knowledge of the country’s past available to the West.

The end of the 19th and beginning of the 20th century were a golden period for technology. An especially outstanding explorer was Flinders Petri, who strove for high precision in his studies and detailed documentation.

New discoveries were made.

In the 1890s many papyrus scrolls were found, which resulted in recognising papyrology as a distinct discipline of science.

All these works remained under the control of institutions created by Europeans, who did not return to Egypt many of the antiques they transported to their countries. What they couldn’t take, however, they tried to protect on the spot (in situ) which marked the beginnings of the contemporary approach to historical built heritage.

Although on their tour of Medinet the heroes were primarily to admire ancient heritage, Staś was most happy about another pastime. What was it?
Shooting (animals).
List two examples of built heritage that Nel and Staś saw.
On their excursion to Medinet: Hanar Pyramid, remnants of the Labyrinth, ruins of Crocodilopolis (Faiyum), ruins by Lake Caroun; earlier (in flashbacks): the Sphinx and pyramids near Cairo.
Why was Flinders Petri’s methodology unique?
He documented the course of the excavation; he was not keen on speed, but on the precision of work.
What is papyrology?
It’s a discipline devoted to the study of papyruses.