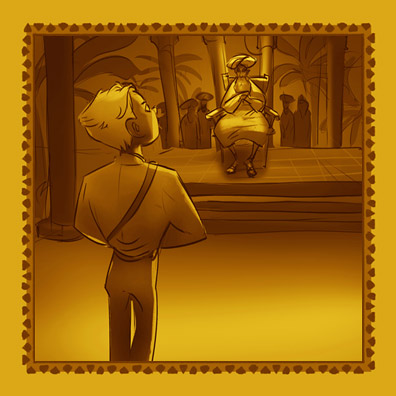 Most of the Africans whom Staś and Nel meet follow Islam. Besides Christianity and Judaism, it is one of the main monotheist religions, i.e. ones that assume the existence of one God. Followers of Islam, known as Muslims, make up nearly a fourth of the global population.

Islam began in the 7th century AD. Around the year 610, Mohammed began speaking of the visions he received from Archangel Gabriel. Taken down by his disciples, the words of the prophet make the holy book of Islam, The Quran. By the death of Mohammed in 632, his followers had conquered the whole of Arabia and later began an over 100-year-long period of conquests, when Islam dominated nearly the whole Middle East, the north of Africa, and the Iberian Peninsula.

The God of Islam is known as Allah. According to Muslims, Allah communicates with them through angels who bring visions to prophets, that is, people who are in special contact with God. The most important prophet is Mohammed. Muslims believe in the resurrection of the body on the day of the end of the world, when Allah will judge people, and divide them into the future residents of paradise and hell, and decide whose sins will be forgiven.

What do Christianity and Islam have in common? Mention at least two features.
Monotheism, belief in resurrection, religious fasting, pilgrimages, belief in prophecies and the mission of angels, care for the poor, connections to Judaism.
Who was Mohammed?
A prophet, ruler of Arabia, and father of Islam.
What is the attitude of Staś to Islam?
Staś believes that Christianity is the only proper religion, which is why he wants to convert Muslims.
How does Henryk Sienkiewicz describe the prayers of Muslims?
There are plenty of answers possible; his central theme is that Islam, and especially the ritual prayers, organise the life of Muslims.