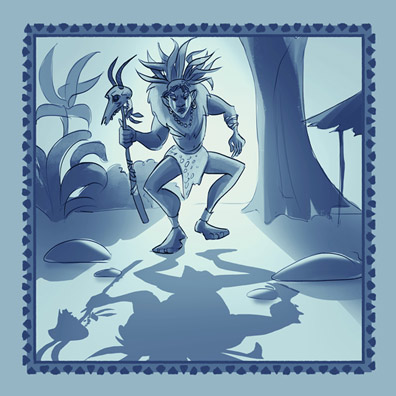 Reading In Desert and Wilderness, one can have the impression that Africa is a land of spirits. Its residents shudder before the anger of the evil “mzimu” capable of bringing death and other miseries on people. For Staś it was obvious that the evil “mzimu” do not exist but are an invention of the charlatan witchdoctors who scare the naïve fellow tribespeople and appropriate the gifts offered to appease the spirits. The “local beliefs” described by Henryk Sienkiewicz in the novel, have, however, hardly anything in common with what the tribes of Central and Eastern Africa used to believe in and still often do.

The “mzimu” mentioned by the author are most probably the spirits of the forefathers who were rather considered intermediaries between the people and the deity, or could just be personifications of the deities.

African tribes were often monotheist, which means that they believed in a single deity. Although the deity was invisible himself, he was often believed to inhabit the peaks of high mountains, which is why prayers were often directed towards them. Against stereotypes, he recalled the Christian God as he was the primordial and omnipotent creator, and was sometimes referred to as “the father of people”.

The inconsistencies we can find reading In Desert and Wilderness are not caused by any ill will on behalf of the author. That way of presenting native Africans and their beliefs resulted from the contemporary state of knowledge and was characteristic of Europeans of the early 20th century.

What actually was a “mzimu”?
It was an evil spirit, which can be identified with the spirits of the forefathers.
How did Staś demonstrate the hypocrisy of the witchdoctors to the people of one of the villages?
When the witchdoctor was making noise, pretending to be the call of the evil mzimu, inside his hut, Staś had King the elephant batter it. Having picked the charlatan’s drum, the boy showed it to the whole village that had gathered around him, and made precisely the noises that the witchdoctor did before.
Who in the novel is called “the good mzimu” and why?
It’s Nel. Kali used the name to subjugate the local tribes that, having learned that Nel is the good mzimu, began to honour her.
Did Sienkiewicz describe the religions of Africa faithfully and credibly?
No, his vision of African religions abounds in errors resulting from the level of knowledge of that time.