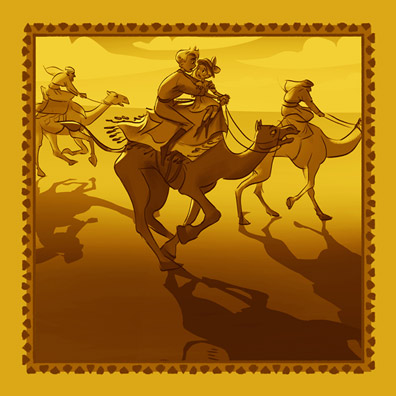 The first adventures of Staś and Nel brought them to a land inhabited by followers of Islam.

In the 7th century, that is before Islam developed as a religion, the name “Arab” denoted a resident of the Arabian Peninsula, that is Arabia. It was not connected to any religion: many Christian and Jewish communities are known to have been at large in the area in the Middle Ages. Today, many people from the Middle East and North Africa who converted to Islam are called Arabs. There are about 500 million of them, while countries lying far beyond Arabia are generally considered Arab states, and they include Morocco, Algeria, Egypt, Sudan, Syria, Iraq, and even Somalia. Contemporary Arabs often differ greatly one from another due to different history of their ethnic groups.

One such group is the Bedouins hailing from the peoples inhabiting the deserts of Syria and Arabia (the word itself refers to a person living in the desert). Bedouin tribes were usually nomadic, that is their life was organised so as to be constantly on the move. The main occupation of Bedouins was herding animals, and they usually bred dromedaries (Arabian camels) and goats. When slavery was still legal, some Bedouins were involved in the slave trade.

Thus, nearly all Bedouins are Arabs, but certainly not every Arab is a Bedouin. There are around 20 million people who call themselves Bedouins, of which nearly half live in Sudan, and plenty no longer follow the traditional Bedouin style of life. Small Bedouin groups travelling the Sahara can still be met.

Explain who Bedouins are and who Arabs are.
Bedouins are an Arab tribe, and Arabs are mostly the Islamic people of the Middle East and North Africa.
Why do Bedouins live nomadic lives?
Life in the desert often makes farming impossible, and the shepherds can’t even settle.
Why was the caravan with Staś led by a Bedouin?
Bedouins spend their lives in the desert and know it best.
How does Sienkiewicz present Bedouins travelling with children?
They have no names (they are always presented as “two Bedouins”), are compared to Native Americans, and have their exotic looks emphasised.