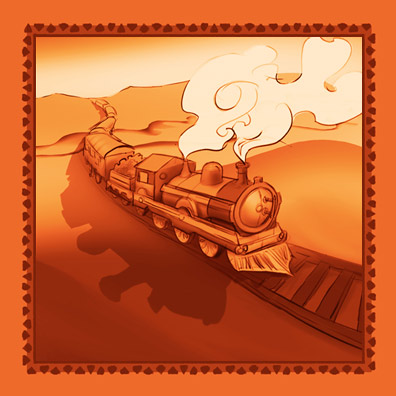 Staś and Nel went to meet their fathers by train. The construction of railways was begun by colonisers in the 19th century. Britain was the leader in the development of railway networks. The new means of transport helped the British increase profits drawn from the captured territories, because railway helped to move the goods obtained deep in the continent to the ports, from where they were sent to Europe. This was the chief means of transport, mostly for the mined goods, but also for cotton from Egypt, Sudan, and Uganda, as well as for beef and corn from the south.

Faster transport was useful also for the army, soldiers could move more quickly between colonies.

The most famous project connected with the English railways in Africa was the plan to construct a chain of British colonies “from Cape Town to Cairo”,  i.e. from the southern to the northern end of the continent, connecting the two cities with a railway line. The author of the concept was a British entrepreneur, Cecil Rhodes. The implementation of Rhodes’s plan contributed to the death of many people. Not only the conquest of new territories, but also the construction of the railway line had horrible consequences. Workers employed on it died of malaria and other tropical illnesses, but also were killed in attacks of predators, and due to lack of fresh food, whose supply was made possible only by the developing railway system.

Ultimately, the route was never finished, yet the sections constructed in the 19th century are still in use, and African states continue to develop their local railway networks.

Whom did Staś and Nel meet while travelling on the train?
The children met Captain Glenn and Doctor Clary.
Who accompanied the heroes on their way to the fathers?
Dinah, Nel’s guardian.
Mention two reasons why the British built railway lines in Africa.
The possibility of transporting passengers, a means of transport of the materials obtained in the colonies, benefits for the military.
What was the initiative “from Cape Town to Cairo”?
It was a plan designed by the entrepreneur Cecil Rhodes to develop a railway track connecting the British colonies along the length of the African continent.